Meow Parlour is NYC’s first cat café–a concept brought over from Japan, where living conditions are even more congested than NYC. Sometimes housing units are barely big enough for people, let alone a fuzzy, so city dwellers visit cat cafes to get in their kitty time instead. 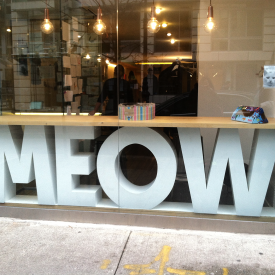 Meow Parlour is tucked away in a little corner on the lower East Side, near Chinatown. Its been open for about a year, and yet I hadn’t made the pilgrimage. Surprising, I know. But given the MLK three-day weekend and the fact we were in the city anyway to have lunch with our cousin who lives in the area, it made sense to fix that.

(to me, anyway. Justtwomorethings just shrugged and said ok).

Meow Parlour is actually 2 parts: 1 (cat-less) café with drinks and sweet eats, and the actual (cat-full) café. You can guess which part we spent most of our time. Meow Parlour recommends you book ahead of time on their website ($5 + tax per person for a 30 min slot) as the space is small and they try to limit the number of people at any one time in order not to overwhelm the kitties.

The kitties themselves come from Kitty Kind, an NYC rescue group, carefully vetted to be people friendly and all very much adoptable. They indeed seemed pretty quiet and chill–though it may have been because we came mid- afternoon, so they were all getting some z’s in. But a kitty is a kitty, especially several adorable circles of fluff.

30 min is actually about right. Ok, I could have stayed longer, but I am abnormal in my kitty adoration. Justtwomorethings was visibly relaxed but “ok, I’m done” at about the 20 min mark, and it is a bit difficult to get too engaged with it when there are other people competing in the room for feline fuzzies, and you want more interaction with the cats than staring adoringly at their sleeping faces (not that I see anything wrong with that).

Meow Parlour also sells various kitty themed merchandise, from buttons to socks to totes. I refrained from the t-shirts, as Justtwomorethings reminded me of my plethora at home, but I did spring for a pillow case cover and a tote. The markup is really not as bad as other theme places, and well…its for the kitties!

One thought on “Meow Parlour”

Apartment Therapy| Saving the world, one room at a time

The latest news on WordPress.com and the WordPress community.